“Then you will know the truth, and the truth will set you free.” – Jesus, voicing the core energetic of Sagittarius

December brings a rare confluence of astrological alignments that can liberate us from the false narratives that have entrapped us, and empower us to author the life stories we deserve to live.

In this post, I’ll look at Saturn’s shift out of Sagittarius and into his home sign of Capricorn¹. I’ll explain why this Mercury Retrograde is one you don’t want to ignore. And I’ll look at how the Galactic Center and Great Attractor – two supermassive black holes / gamma ray transmitters located in alignment with Sagittarius – are conspiring with the planets to liberate us this month.

Mercury is the archetype of the mind. Mercury retrograde periods always introduce mental discontinuity. By disrupting our habitual thought processes, the Trickster forces us to see things from a different vantage point. This is frustrating and sometimes painful, but it gives us the opportunity to correct faulty habits of mind that have taken hold in the area of life symbolized by the signs and houses activated by the Mercury retrograde.

Because the December 2017 Mercury retrograde began with Mercury in a tight conjunction with Saturn, this retrograde will carry a Saturnian vibe. Positively, this can help us review the progress we’ve made while Saturn was in Sagittarius and mentally prepare ourselves to meet the challenges and opportunities of Saturn in Capricorn from 2018-2020.

This Mercury retrograde is also designed to help us manifest the vision of an enlightened life that so many of us received at the August 21 Leo total solar eclipse. How do we know this? The December Mercury Rx began on December 2 conjunct the Galactic Center at 27 Sagittarius. (This, along with Uranus at 25 Aries, made up the Grand Fire Trine that was in effect at the August eclipse.)

As if that weren’t enough, the Mercury retrograde ends on December 22 with Mercury conjunct another deep space pulsar, the Great Attractor at 14 Sagittarius.

The Galactic Center is literally the center of the Milky Way galaxy. (The alignment of the solstice point with the G.C. is one reason why December 2012 — the end of the Mayan calendar — was considered to be so significant by the ancient American stargazers.)

Sometimes called the Great Central Sun, or the Sun of our Sun, the G.C. can be thought of as the source point of creation for our galaxy. An international team of scientists recently published a study theorizing the supermassive black hole at the heart of the G.C. is an ‘energy accelerator’ capable of accelerating cosmic rays to “energies 100 times larger than those achieved at the largest terrestrial particle accelerator.”

These supercharged particles that are always streaming to us from deep space are activated in our consciousness by astrological alignments; planets making conjunction with the G.C. enable us to make meaning by filtering and focusing the pure light information emanating from the Galactic Center. (See conjunction dates for the Sun, Mercury, and Venus below.)

The Great Attractor at 14 Sagittarius is another powerful point that – in my experience – is a little trickier to work with than the G.C.. The Great Attractor has the physical, scientific quality of bending time and space. While alignments with this point can enable us to ‘see into the future,’ they can also be very disturbing. The Great Attractor often seems to reveal humanity’s collective shadow: the primordial fears and nightmarish, apocalyptic images lurking in the unconscious.

If we are able to see these for what they are – visions of what could befall us if we refuse to step up and activate our divine potential – we can work with these shadow images to integrate our own inner darkness and move more fully into our conscious creative power.

The current Mercury retrograde is designed to give us a check-in on how we’re doing with that process in light of the current precarious state of events in the world at large. Honoring the progress we’ve made in aligning our minds and actions with the truth (Saturn in Sag) can empower us to take meaningful action in restructuring the world while Saturn is in Capricorn for the next three years.

Saturn Review/Preview: from Sagittarius to Capricorn 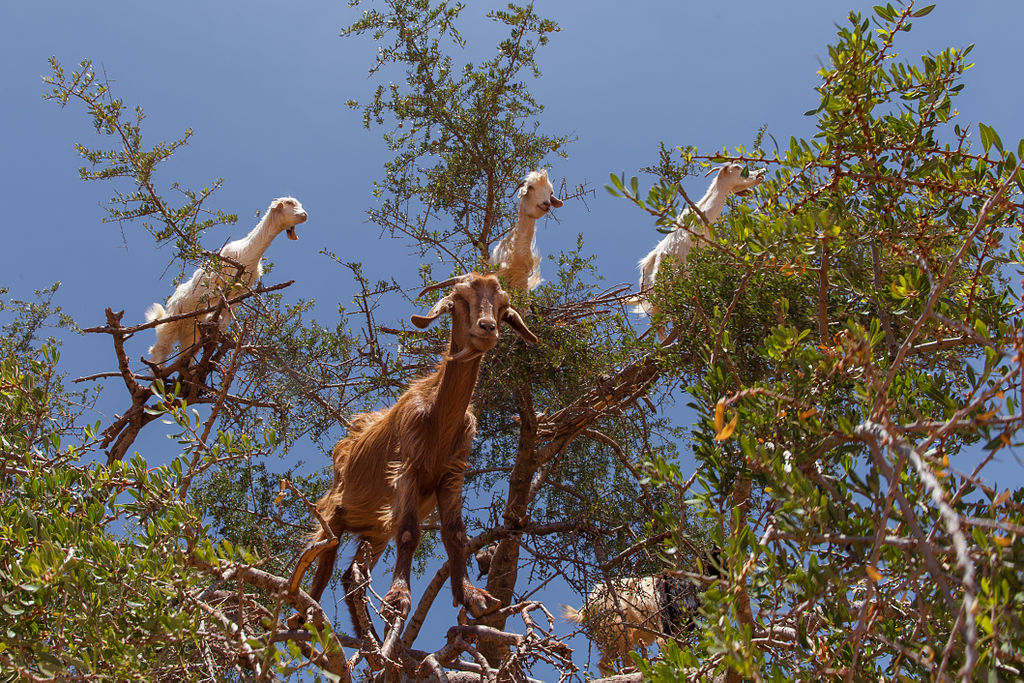 The goat is associated with Saturn as the ruling planet of Capricorn in both astrology (the mountain or sea goat) and tarot (Trump XV – Old Pan, or the Devil). Image: goats in an argan tree by Grand Parc, Bordeaux, Wikimedia Commons CC BY 2.0.

Saturn is the archetype of authority, structure, and material-world success. Saturn is often called the Teacher Planet. Whenever he enters a new house or sign, he brings lessons to the part of life that the house or sign represents in your natal and solar charts.

Saturn has a fearful reputation, but in reality he is objectivity personified. He doesn’t care about your feelings; he wants to see results. Saturn demands that we come face to face with our fears and shortcomings and that we then demonstrate the diligence, perseverance and hard work required to convert these into strengths. (Or at least develop some semblance of competence!)

Sagittarius is the sign of the 10th House in my solar chart as a Pisces (this is true for all Pisces). The 10th House symbolizes our ambitions, our career, our life’s work, our status – who we are as a public self.

Any time Saturn leaves one sign or house in your chart, it’s a wise idea to take an inventory of what you’ve learned and accomplished during the Saturn transit. Knowing objectively where you’ve succeeded and grown – and what work remains to be done – aligns you with the Saturn principles of objectivity, structure and authority and prepares you to meet the next set of challenges symbolized by the sign or house Saturn is about to enter.

Click here to find out how you can get a free 30-minute Saturn Review/Preview reading with DK in December.

Hard Knocks, Big Ups: My Journey with Saturn in Sagittarius

Over the last three years, I had to take a long, hard look at my career goals and at the ramshackle way I had been pursuing them. What I saw wasn’t pretty. I knew entering 2015 that my career focus needed to shift. I felt the next level of my calling rising up within me and I had a vision of what it would look like when I arrived there. But I had no plan for getting from where I was to where I wanted to be.

Saturn is kind of like the building inspector of the zodiac. He’s going to probe your foundations, examine the structures you’ve built (or not), and either reward you for your good work or knock down that part of your house and force you to rebuild it.

What I saw under Saturn’s tutelage was that the structures I had built in my career were haphazard, disjointed, and often just hastily tacked together to answer some immediate need.

In the last three years I’ve had to push myself harder than I knew I could, working on things I never wanted to work on before: things like understanding how marketing works, like defining who I am and what I offer my customers in a way that enables me to reach the people I’m called to serve.

Saturn has pushed me to develop more structured approaches to creating and sharing content. And because none of these are habits of mind that come naturally to me, I’ve had to reach out for help from people who are accomplished at these things. (Saturn will also bring successful, highly competent people into the part of your life he is activating.)

As hard as it has been to start over from scratch in many ways, I’m actually optimistic about the business side of my career for the first time in many, many years. I feel confident in what I’m doing and in how I’m doing it in a way I’ve never known before. After spending most of my adult life feeling baffled – or downright antagonistic – about things like sales, marketing, and money, I’ve accepted Saturn’s challenge to overcome my fears and learn to develop competence with these business skills.

This has been a painstaking process for me and I won’t be finished with it by December 19, when Saturn leaves Sagittarius. But I’ve already started to reap the rewards from my hard work and perseverance. I’m seeing my clients regularly make big, positive life changes from our work together. My core audience now consists of exactly the kind of people I most love communicating and spending time with. And, perhaps biggest of all, I’ve been able to heal the inner division between my spiritual side and my creative side that had dogged me my whole adult life.

This sense of knowing the truth of who I really am, finding the courage to share that truth with the world, and feeling my confidence and enthusiasm grow with each passing week is for me the essence of Saturn’s journey through Sagittarius. When we accept Saturn’s challenge of taking responsibility for our lives, he gives us the gift of inner authority. As I’ve mentioned often this year, authority and author share the same root origin.

This is how Saturn’s lesson of taking full responsibility for yourself and your life ultimately results in freedom. By activating our inner authority, we become the authors of the life – and of the world – we believe in.

It is often easiest to tune in to the meaning of deep space astrology by looking back at what we were experiencing on the day (+/- a day or two) of a planetary alignment with the G.C. or Great Attractor. Here are key dates for the current and recent transits involving the Sun, Mercury, Venus, Saturn, the Great Attractor and the Galactic Center.

11/9 – Mercury enters out of bounds by declination

1 – Saturn will remain in Capricorn until December, 2020, except for a brief foray into the early degrees of Aquarius in April, May and June of 2020. Jump back

This site uses Akismet to reduce spam. Learn how your comment data is processed.